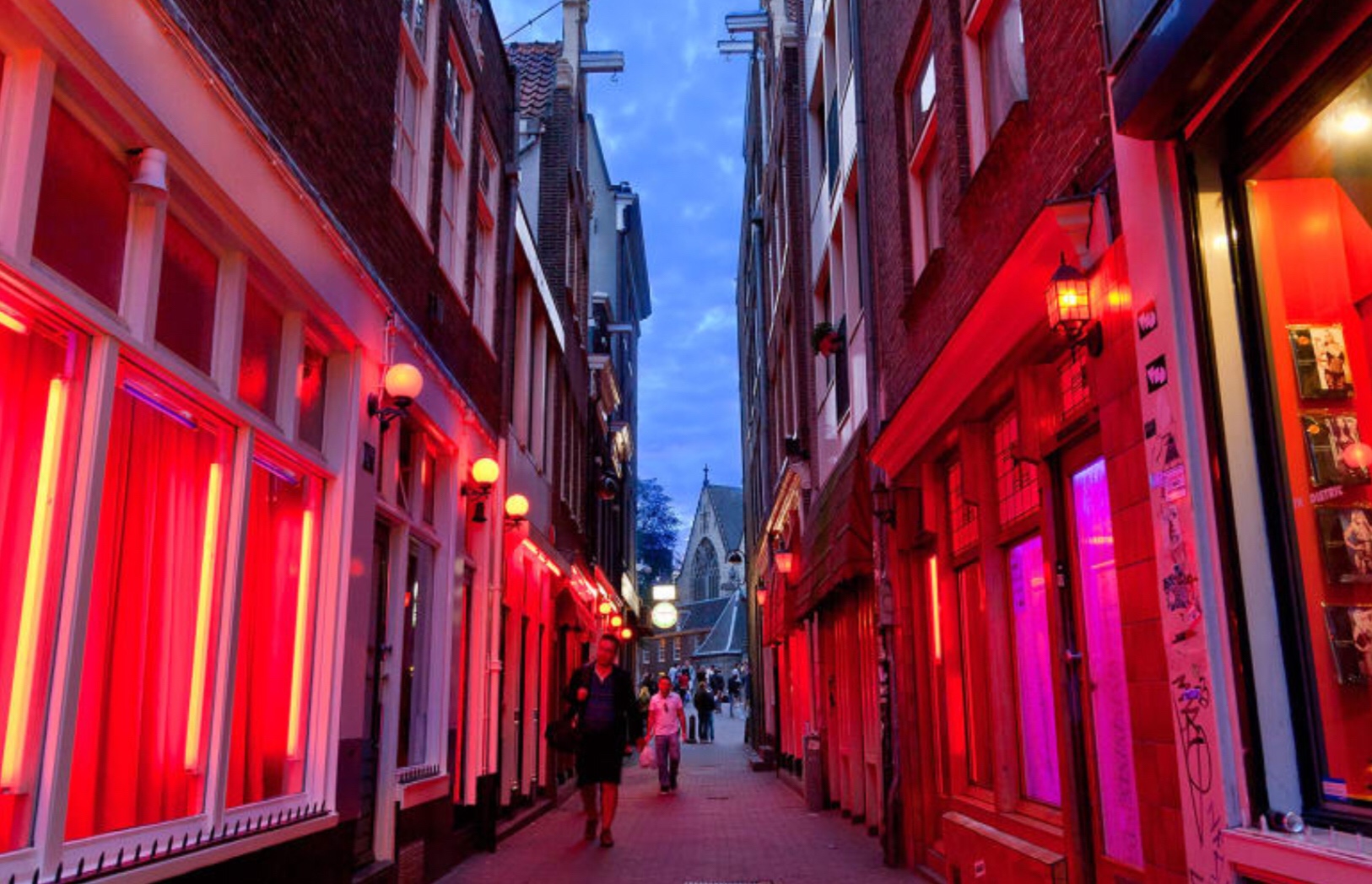 In proper light and stable mind, Amsterdam’s twisty cobblestone streets can be difficult to navigate. Through the smoky haze of a drug- or alcohol-fueled bender, they’re impossible. So it was no small miracle when I found myself under the same dimly lit S&M parlor sign my friend Sully and I had walked beneath hours earlier, before both of us were too high to see.

Sadomasochism as a sexual distraction dwells in the seediest gutter of the human psyche. Mainstream culture has been quicker to embrace cosplay than “the dark arts,” as poetic practitioners call their game. These perversions read like a steaming bowl of deviant alphabet soup: BND, OTK, CEI, CFNM. I had spectated some kinky scenes in my day, and even engaged in harmless role play with girlfriends from time to time, but this was my last, best chance to take weird to “11” with a dominant mistress on foreign soil. In 14 hours, Sully and I were flying home.

As I steadied myself on the banister of the narrow staircase in front of a heavy black door, a terse voice with a gentle accent cracked through the intercom.

“Let’s make one thing clear before we move on—I ask the questions, you answer them.”

“Not possible. Slaves do not choose their fate—I choose it for them.”

“We shall see. “When I push the button, open the door, walk up the staircase, enter the room and sit on the chair.”

The remote-control deadbolt released with a muffled buzz and the heavy black door swung open slowly. The foyer was pitch black, save for a red glow at the top of steep stairs. Soviet bloc techno thrumming in the background enhanced the cartoonish ambiance of the scene. I climbed the staircase as instructed, pulled a small chair away from the wall and sat down.

“Are you here?” I asked sheepishly. The hash in my head, the beats on the stereo and the red lights in the room drenched the small, tidy but overstuffed space in dense shadows. Suddenly, a slender hand in a black rubber glove reached toward me from behind. I jumped, but a second hand rested on my shoulder in a reassuring manner. Without saying a word, the mistress blindfolded me with a satin sleeping mask, the kind they give you on Economy Plus flights to China.

“Can you see out of this mask?”

“You are not my child, you are my slave. You will call me Mistress every time we speak. Do you understand?”

Before I could finish the words, a vulcanized rubber palm landed with a sting on my cheek.

“I will give you the benefit of the doubt and say drugs and alcohol have made you stupid and lazy. Am I right?”

Yes, Mistress, I drank some booze and smoked some hash.”

“A simple admission that you are stupid and lazy would have sufficed. I see now the challenge of returning you to your senses is mine. How do you propose we proceed?”

“I’ll do whatever it takes to please you, Mistress.”

“If you knew what it took to please me, you wouldn’t say that. Let’s start with the basics—why did you move the chair before sitting down?”

Smack—another shot to the cheek, this time with more gusto.

“For this to work, you must do exactly as I say. Understood?”

“Did you enjoy yourself, slave?”

“I’m not sure. The blindfold made it impossible to know what was going to happen next.”

“You have no idea how right you are…”

Still cloudy from the dangerous narcotics, but only slightly embarrassed by the depths of my freshly mined depravity, I stumbled back to the hotel where Sully was sleeping off his own night of bad choices. Taking a seat on the corner of my bed, I emptied my pockets onto the nightstand. As I pulled off my shoes, Sully lurched upward in a fright, wild eyes blazing.

“I saw a nightclub on the way back to the hotel—let’s eat disco biscuits and dance with some Dutch girls.”

Sully didn’t have to say it twice. While pill-popping isn’t my thing, I’ll cut the rug at the drop of a hat. “Let’s go!” I shrieked as we flew threw the lobby to the last stop on our freakout hell ride. At the disco Sully smoked weed with Dutch amazons next to a pile of rusty 3-speeds while I danced like a white Rerun on “What’s Happenin’?” When there were no more beats or blunts to fuel our stupidity, we walked back to our hotel—we had a plane to catch late Sunday morning.

After 20 hours of transit that included layovers on two continents, we finally arrived at our humble Lake Elsinore home, only slightly worse for wear.

“What the fuck did we do last night, Soulman?”

Hell, son—was that last night, or last month? “I feel like I’ve been shot out of a cannon. “I don’t remember shit after the hash bar—where’d you disappear to?”

“I did some bad things, Sully—I don’t remember what. “Let’s not talk about this with anyone.”

True to his word, Randy didn’t share any gory details of our European shenanigans with co-workers or friends. Then, about a month later, I received a cryptic email:

I clicked the link in Sully’s email and waited an eternity for the page to load—remember, this was wifi at the turn of the millennium. Eventually, a Betty Page doppelgänger in a vinyl bustier and leather boots filled the screen. Between her widely spread legs crouched a chubby man on all fours, a dog collar around his neck and a leather ponytail dangling from his bare ass. Though his face was obscured by a ball gag, his identity was unmistakable. That pony boy was me.

…you looked like hammered dog shit when you came back to the hotel that night—I knew you were up to no good. When I found a business card on your nightstand, I got on Ask Jeeves and did some poking around. You’re a sick man, Harold McGruther.